By now you probably know.  You know we've lost one of the best and brightest.  We've lost an incandescent smile, a heart as big as any ocean, a giant.

I worked with Magnus for just a few weeks, but have thought about him often (like- every day) for a decade.  He was just so NICE.  I knew nothing about sailing when we met, I was a glorified groupie- running errands and making coffee.  Magnus made me feel like I was a terribly important part of the team.  That what I was doing was helping them succeed.  A big hug and a kiss every time he saw me- he was the best at the world at what he did but he took the time to make a nobody landlubber feel important.

That was his gift.  Beyond being a legendary sailor, he had the ability to make every single person he met feel important.  It was no joke.  To him, everyone WAS important.

I am heartbroken, caught between being enraged at the circumstances and crawling into bed and hiding in my sadness.

As I've said several times already since hearing the news, the only consolation is there is a new star in the heavens for sailors to navigate by.

Godspeed Mange.  You changed my life.  You will be missed.

What a shocker this morning as I read SCA's press release about Magnus Olsson:


2013-04-19
Very sadly Magnus Olsson, one of the coaches for Team SCA, SCA's participation in the Volvo Ocean Race, suffered a stroke this week. He is receiving the best medical care and our thoughts are with him and his family.

Magnus (Mange) is one of my favorite people.  I've written about him before.  I worked with him in Miami with the ASSA ABLOY Racing Team back in the day.

It is impossible to know Magnus and NOT love him.  As Patrick Shaughnessy (President of Farr Yacht Design) tweeted "Wishing Magnus Olsson, everyone’s favorite sailor, and worlds most smiley person, a speedy recovery. Get well Mange." 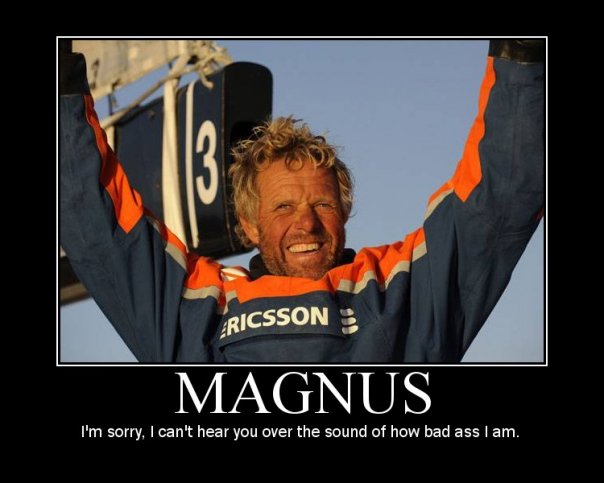